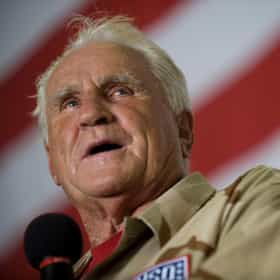 Donald Francis Shula (born January 4, 1930) is an American former professional football coach and player who is best known as the head coach of the Miami Dolphins, the team he led to two Super Bowl victories, and to the only perfect season in the history of the National Football League (NFL). He was previously the head coach of the Baltimore Colts, with whom he won the 1968 NFL Championship. Shula was drafted out of John Carroll University in the 1951 NFL Draft, and he played professionally as a defensive back for the Cleveland Browns, Baltimore Colts, and Washington Redskins. Shula was named 1993 Sportsman of the Year by Sports Illustrated. He had only two losing seasons in his ... more on Wikipedia

Don Shula is ranked on...

Don Shula is also found on...