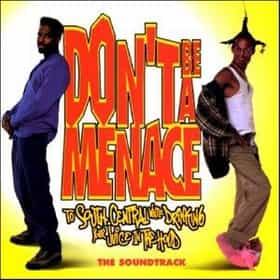 Don't Be a Menace to South Central While Drinking Your Juice in the Hood is a 1996 American comedy film directed by Paris Barclay, and produced by Keenen Ivory Wayans, and also written by Wayans brothers Shawn and Marlon Wayans, who also both starred in the lead roles. The film was released in the United States on January 12, 1996. Similar to I'm Gonna Git You Sucka, the film spoofs a number of black, coming-of-age, hood films such as Juice, Jungle Fever, South Central, Higher Learning, Do the Right Thing, Poetic Justice, New Jack City. ... more on Wikipedia

Don't Be a Menace to South Central While Drinking Your Juice in the Hood is ranked on...

#367 of 1,194 The Absolute Funniest Movies Of All Time 1M VOTES The funniest movies of all time, ranked by fans. What are the funniest movies ever made? From Airplane! to The Jerk to The 4...
#118 of 720 The Best Black Movies Ever Made, Ranked 664.3k VOTES The best black movies are favorites that explore African-American culture and themes. This list is ranked by film fans, many...
#57 of 145 The Best Movies of 1996 13k VOTES A list of the best movies of 1996, from classics like Romeo & Juliet to dramas like Jerry Maguire. The '90s were a decad...
#79 of 94 The Worst January Movie Releases 44.9k VOTES If you're an actor, director or producer, the last thing you want is your movie to be released in the January dumping ground...
#10 of 84 The Funniest Black Movies Ever Made 27.6k VOTES Some of the funniest movies ever made feature talented casts of African American actors and actresses. The top black comedie...
#22 of 95 People who voted for Don't Be a Menace to South Central While Drinking Your Juice in the Hood... also upvote The Jetsons on The Best Saturday Morning Cartoons for Mid-80s - 90s Kids The Best Hood Movies 117.4k VOTES This list of the best hood movies includes some of the greatest hood films set in, and about, the 'hood.' Hood films began a...
#6 of 31 The Best Black Comedy Movies of the '90s 3.7k VOTES Prepare for a plethora of Wayans brothers, because this is a list of '90s black comedy movies, ranked from best to worst. It...
#19 of 35 The Funniest Movies to Watch Drunk 458 VOTES It's happened to all of us. You come home after two respectable drinks at the bar, only to realize you've still got a whole ...
#8 of 23 The Best Omar Epps Movies 688 VOTES List of the best Omar Epps movies, ranked best to worst with movie trailers when available. Omar Epps's highest grossing mov...
#5 of 24 The Best Damon Wayans Movies 548 VOTES List of the best Damon Wayans movies, ranked best to worst with movie trailers when available. Damon Wayans's highest grossi...

Don't Be a Menace to South Central While Drinking Your Juice in the Hood is also found on...