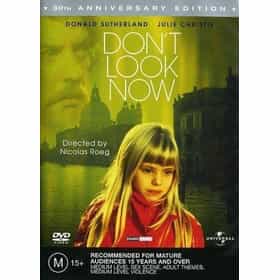 Don't Look Now is a 1973 independent British-Italian film directed by Nicolas Roeg. It is a thriller adapted from the short story by Daphne du Maurier. Julie Christie and Donald Sutherland star as a married couple who travel to Venice following the recent accidental loss of their daughter, after the husband accepts a commission to restore a church. They encounter two sisters, one of whom claims to be clairvoyant and informs them that their daughter is trying to contact them and warn them of danger. The husband at first dismisses their claims, but starts to experience mysterious sightings himself. ... more on Wikipedia

Don't Look Now is ranked on...