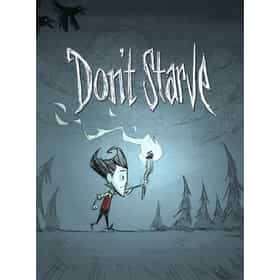 Don't Starve is a 2013 action-adventure video game with survival and roguelike elements, developed and published by the indie company Klei Entertainment. The game was initially released via Valve's Steam software for Microsoft Windows, OS X, and Linux on April 23, 2013. A PlayStation 4 port became available the following year and further versions for iOS and mobile phones are under consideration. Downloadable content titled Reign of Giants was released on April 30, 2014, and a multiplayer expansion called Don't Starve Together was announced in May, and is currently in open beta testing. The game follows a scientist named Wilson who finds himself in a dark, dreary world and must survive ... more on Wikipedia

Don't Starve is ranked on...

#119 of 186 The Most Popular Video Games Right Now 1.3M VOTES Gamers everywhere, we're ranking the most popular games in 2020. How popular will they be compared to anticipated 2020 video...
#141 of 155 The Best Video Games Of The 2010s, Ranked 101.5k VOTES With so many awesome titles and ground-breaking releases, it’s definitely been a good decade for gamers. While it might be h...
#972 of 1,581 The 100+ Best Video Games of All Time, Ranked by Fans 990.9k VOTES These are the greatest games of all time, as voted on and reranked by gamers like yourself. Video games are more popular tha...
#26 of 122 The Best Survival Games of All Time 42.6k VOTES In a way, most games are about survival, but some focus on that need far more than other games. When looking at survival vid...
#38 of 83 The Best Games That Never End 17.5k VOTES Back in the earliest days of gaming, the only reason a game would come to an end was due to the limitations of computing. Ga...
#8 of 28 The Best Local Co-Op Games For PlayStation 4 553 VOTES The PlayStation 4 is home to a number of amazing games, but how many of them can you play with someone else? Online multipla...
#19 of 28 The Best Building Games Out Now 1.1k VOTES Nothing's better than watching your very own creation come to life (though building up utopias and then watching them crumbl...
#41 of 77 The Best Farm Simulator Games 3.9k VOTES Plant your crops, and let your land flourish! These are the best farm simulator games that are available on any console, inc...
#16 of 20 The Most Popular Roguelike Video Games Right Now 142 VOTES We’re ranking the biggest and most popular roguelike video games in 2020. This growing subgenre often utilizes dungeon-style...
#19 of 25 The Best Xbox One Indie Games 387 VOTES When it comes to good indie games for Xbox One, there is a pretty good amount of variety. For that reason, we're rankin...
#15 of 26 The Best PlayStation 4 Building Games 4.8k VOTES Building has become a very popular genre within gaming, and there are plenty of PlayStation 4 titles that fit the mold. From...
#8 of 44 The 30+ Best PC Indie Games on Steam 1.5k VOTES From 2D puzzle platform games to full fledged 3D titles, these PC indie games on Steam are sure to tickle that ind...
#7 of 35 The 25+ Best PC Survival Games On Steam 2.8k VOTES If you're using Steam, you probably have the best collection of survival games at your fingertips in all of gaming. There ar...
#10 of 19 The Best Action-Adventure Games Of 2018, Ranked 374 VOTES Here are the best new action-adventure games of 2018, ranked by gamers everywhere. Featuring sci-fi, fantasy, horror, and op...
#19 of 21 Underrated Switch Games That Are Def Worth A Second Look 84 VOTES There are tons of great games exclusive to the Nintendo Switch, but there are plenty of underrated games, too. The Switch is...
#24 of 40 The Best Steam Games Under $10 156 VOTES Looking for some great PC games on a budget? Quit paying full price for old games and check out the best games on Steam for ...