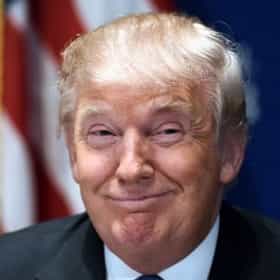 Donald John Trump (born June 14, 1946) is the 45th and current president of the United States. Before entering politics, he was a businessman and television personality. Trump was born and raised in the New York City borough of Queens, and received his B.S. degree in economics from the Wharton School at the University of Pennsylvania. He took charge of his family's real estate business in 1971, renamed it The Trump Organization, and expanded it from Queens and Brooklyn into Manhattan. The company built or renovated skyscrapers, hotels, casinos, and golf courses. Trump later started various side ventures, mostly by licensing his name. He managed the company until his 2017 inauguration. ... more on Wikipedia

Donald Trump is ranked on...

Donald Trump is also found on...