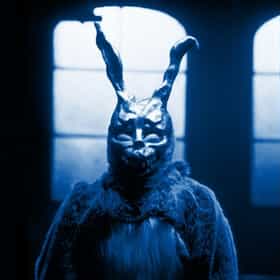 Donnie Darko is a 2001 American supernatural drama film written and directed by Richard Kelly and starring Jake Gyllenhaal, Drew Barrymore, Patrick Swayze, Maggie Gyllenhaal, Noah Wyle, Jena Malone, and Mary McDonnell. The film depicts the adventures of the title character as he seeks the meaning and significance behind his troubling Doomsday-related visions. Budgeted with $4.5 million and filmed over the course of 28 days, it grossed just under $7.7 million worldwide. Since then, the film has received favorable reviews from critics and has developed a large cult following, resulting in the release of a director's cut on a two-disc special edition DVD in 2004. ... more on Wikipedia

What to Watch If You Love Donnie Darko 359 votes What are some shows like Donnie Darko? That’s a tough one, because if you think about it, Donnie Darko is a really unusual m...
Travel Through Time With The Best 'Donnie Darko' Quotes 239 votes Contemplate the meaning of life, time travel, and the possibility that there might not be a God with the best Donnie Darko q...

Donnie Darko is ranked on...

Donnie Darko is also found on...