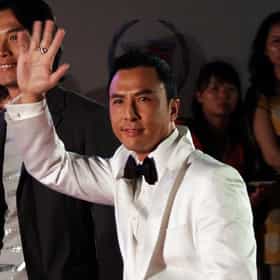 Donnie Yen Ji-dan (Chinese: 甄子丹; born 27 July 1963) is a Hong Kong actor, martial artist, film director, producer, action choreographer, stuntman and multiple-time world wushu tournament champion.Yen is one of Hong Kong's top action stars. Yen has displayed skill in an array of martial arts, being well-versed in Tai Chi, Boxing, Kickboxing, Jeet Kune Do, Hapkido, Taekwondo, Karate, Muay Thai, Wrestling, Brazilian Jiu-Jitsu, Judo, Wing Chun, and Wushu. One of the most popular film stars in Asia of the early 2000s, Yen is consistently one of the highest paid actors in Asia. Yen earned HK$220 million (US$28.4 million) from four films and six advertisements in 2013.Yen is credited by many ... more on Wikipedia

22 Hardcore Donnie Yen Fight Scenes to Catch Up On After Seeing Rogue One 256 votes Donnie Yen, the Rogue One Shaolin warrior, is about to explode onto the American film scene in a big way, and you need to ha...

Donnie Yen is ranked on...

#96 of 150 The All-Time Greatest Action Stars 308.2k VOTES Who are the all-time greatest action stars? This list includes some of the biggest names in movie history, and each actor or...
#242 of 258 The Best Marvel Movie Actors Ever 581.3k VOTES Ah Marvel movies. It began in 1944 with serialized films of Captain America and 70 years later, are one of the biggest, most...
#195 of 266 The Greatest Male Celebrity Role Models 104.8k VOTES Male celebrities as role models... what are we looking for? Maybe someone who knows how to lead, be a good team member, or h...
#137 of 141 Celebrities Who Are Great To Sit Next To On A Long Flight 41.4k VOTES The person you sit next to on a long plane flight significantly affects your traveling experience. Sitting next to...
#13 of 86 The Biggest Asian Actors In Hollywood Right Now 7.8k VOTES As the film and TV industry grow in diversity, who do you think are the biggest Asians in Hollywood right now? While plenty ...

Donnie Yen is also found on...