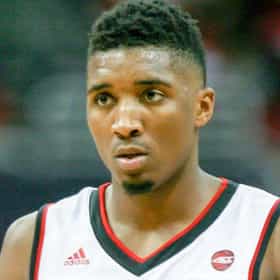 Donovan Vernell Mitchell Jr. (born September 7, 1996) is an American professional basketball player for the Utah Jazz of the National Basketball Association (NBA). He played college basketball for the Louisville Cardinals. He was selected by the Denver Nuggets with the 13th overall pick in the 2017 NBA draft and was traded on draft night to the Utah Jazz. During his rookie season, Mitchell was named to the NBA All-Rookie First Team and won the 2018 Slam Dunk Contest. On March 1, 2018, Mitchell was named as the Western Conference Rookie of the month for the third time that season for games played in February. On April 10, he set a rookie record for most three-pointers in a season with ... more on Wikipedia

Donovan Mitchell is ranked on...