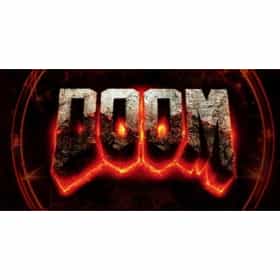 Doom is a 1993 science fiction horror-themed first-person shooter video game by id Software. It is considered one of the most significant and influential titles in the video game industry, for having ushered in the popularity of the first-person shooter genre. The original game is divided into three nine-level episodes and distributed via shareware and mail order. The Ultimate Doom, an updated release of the original game featuring a fourth episode, was released in 1995 and sold at retail. In Doom, players assume the role of an unnamed space marine, who became popularly known as "Doomguy", fighting his way through hordes of invading demons from Hell. With one third of the ... more on Wikipedia

Doom is ranked on...

#42 of 1,588 People who voted for Doom... also upvote Indiana Jones Franchise on The Most Rewatchable Movies also upvote Toy Story Franchise on The Best Animated Films Ever The 100+ Best Video Games of All Time, Ranked by Fans 1M VOTES These are the greatest games of all time, as voted on and reranked by gamers like yourself. Video games are more popular tha...
#29 of 178 The Best Video Game Franchises of All Time 256.1k VOTES If someone asked you what the greatest video game franchise of all time was, how would you answer? If you grew up in the 80'...
#89 of 130 The Best Classic Arcade Games 93.7k VOTES The best classic arcade games include not only the big, big, BEEG cabinet coin-op arcade games from the crazy 80s, but also ...
#34 of 448 The Best Video Game Soundtracks of All Time 54.7k VOTES Asking a group of gamers what the best video game soundtrack of all time is is like asking baseball fans who the best pitche...
#40 of 95 People who voted for Doom... also upvote James Bond Franchise on Every James Bond Movie, Ranked Best to Worst The Greatest Survival Horror Games of All Time 58.8k VOTES These are the best survival horror games ever to hit gaming consoles. These scary video games take you out of your element t...
#19 of 35 The Most Memorable Video Game Sound Bites of All Time 21k VOTES You might be walking down the street or sitting in a subway car when suddenly, you hear it. A little noise, probably coming ...
#12 of 21 The Best Horror Games on Xbox Game Pass 610 VOTES It's kind of a bummer there aren't more horror games on the Xbox Game Pass service, but that doesn't mean there aren't ...
#14 of 15 Most Controversial Video Games That Have Ever Been Released 5.8k VOTES Just like every other form of entertainment, video games have not been immune from stirring up media storms. Ever since the ...
#9 of 29 The Most Violent Video Games of All Time 9.9k VOTES What are the most violent video games ever made? Video games get a lot of flack for being "too violent," but like ...
#10 of 57 The Most Anticipated New Video Games of 2016 30.1k VOTES 2015 was a whirlwind of insanely awesome video games, but 2016's video game releases make it truly a year for the books. All...
#11 of 55 The Best Playstation 4 Action Games 1.2k VOTES Playstation 4 action games come in all shapes and sizes, but there truly is something for everyone when it comes to the acti...
#4 of 19 The Bloodiest Video Games of All Time 657 VOTES Bloody, excessively violent video games can be like cult classic movies - they may have caused controversy, disgust, and mor...
#15 of 19 Video Games You Can Totally Get Away With Playing At Work 536 VOTES Work can be insufferable. People expect things from you, so you trudge through these requests because you'll be (u...
#32 of 80 The Best Action Games on Xbox Game Pass 270 VOTES If you have a Xbox Game Pass subscription on your Xbox One, there are so many great action games just waiting to b...
#12 of 31 The Best 4 Player Co-op Games 1.2k VOTES Video Games by their very nature are competitive... that's kind of the whole point. But what better way to play than with a ...
#13 of 32 The Best Games Currently Available On Stadia 134 VOTES Released in November 2019, Stadia is a cloud-based gaming platform that lets users stream their favorite games without commi...
#4 of 25 The Best Ports For The Nintendo Switch 212 VOTES What's better than playing your favorite game? Being able to play your favorite game anywhere you go! The best ports for Swi...
#14 of 49 The 30+ Best PC First Person Shooter Games on Steam 2.6k VOTES First person shooters are the pinnacle of shooting games on PC. If you're just making the move over from console, or ar...
What Was The Most Popular Video Game The Year You Were Born? 53.2k VIEWS Video games are a huge component of modern American life. They have solidified themselves not just as an industry but as a m...
#4 of 59 The Best Alien Video Games of All Time 754 VOTES Aliens: Always weird, always invading, and always fun to laser blast in defense of Earth. There are so many alien games that...
#1 of 38 The Best id Software Games List 869 VOTES List of the best id Software games with images, including any well-known id Software made games for any platform and console...
#5 of 40 The Best Games Under $10 For Xbox One 198 VOTES Are you a gamer on a budget? Save some cash and check out the best Xbox One games under $10. Just because you play a lot of ...
#16 of 45 The Best PS4 Games Under $10 188 VOTES Are you a gamer on a budget? Save some cash and check out the best PS4 games under $10. While the PlayStation is known for i...
List of Amiga Games 5.2k VIEWS Here is a detailed list of every Amiga game ever produced for the Commodore Amiga system. The Amiga console was one of the m...
The Best Atari Jaguar Games 12k VIEWS List of the best Atari Jaguar games ever produced for the Atari Jaguar system. The Atari Jaguar console is one of the most p...

Doom is also found on...