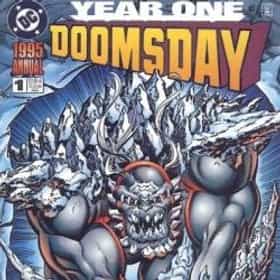 Doomsday is a supervillain who appears in comic books published by DC Comics. Doomsday first appeared as a cameo in Superman: The Man of Steel #17 with his first full appearance in Superman: The Man of Steel #18. He was created by writer-artist Dan Jurgens, who wanted to create a villain who could be a physical challenge for Superman in a straight fight as most of his current foes relied on technology and intellect to oppose the Man of Steel. Imagine Games Network's list of the Top 100 Comic Book Villains of All Time ranked Doomsday as #46. He is best known as the character who "killed" Superman. ... more on Wikipedia

Doomsday is ranked on...

#17 of 644 People who voted for Doomsday... People over 50 are 2x more likely to vote for this People in the Central US are 2x more likely to vote for this The Best Comic Book Villains 274.8k VOTES Who are the best comic book villains of all time? This list of top supervillains in comics includes some of the most notorio...
#19 of 105 People who voted for Doomsday... also upvote Star Wars Franchise on The Greatest Sci-Fi Movies of All Time Comic Book Characters We Want to See on Film 134.6k VOTES   Certain comic book characters definitely lend themselves to film better than others. Sometimes it's their costume...
#4 of 56 The Best Superman Villains Ever 27.3k VOTES List of the most notorious villains from Superman's rogues gallery, as ranked by the fans. Superman has as wide array of adv...
#91 of 128 The Most Awesome Monsters & Creatures Of All Time 101.7k VOTES This list of the greatest monsters and creatures of all time ranks the scary, the sly, the freaky, the brutal and the danger...
#24 of 161 People who voted for Doomsday... People Age 30 to 49 are 3x more likely to vote for this The Most Powerful Comic Book Characters Ever, Ranked 134k VOTES The problem with ranking the most powerful characters in the history of comic books is that writers always want to top the t...
#11 of 18 Terrible CGI Villains In Superhero Movies 56.5k VOTES Although CGI has created some of the most terrifying villains in cinematic history, it's also created some of the most ...
#3 of 25 The Most Destructive Comic Book Events 1.8k VOTES Comics book writers love destruction, especially in the superhero genre. Nothing demonstrates a character's power level fast...
All DC Villains & DC Comics Enemies 402.6k VIEWS DC villains list is a huge list of all the villains from DC Comics. Supervillains make life miserable for the heroes and m...
All Superman Villains & Enemies Listed 265.8k VIEWS This is a collection of all Superman's supervillains that have appeared in comic books or movies as Superman enemies. Use ...