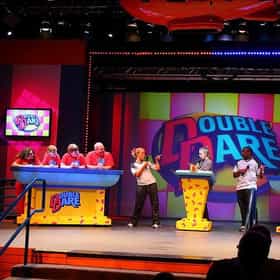 Double Dare is a children's game show, originally hosted by Marc Summers, that aired on Nickelodeon. The show combines trivia questions with occasionally messy "physical challenges". It originally ran from 1986 to 1993. It is often credited with putting the then-fledgling network on the map, and ranked #29 in TV Guide's list of the 50 Greatest Game Shows of All Time. A revival ran in 2000, and a new revival began on June 25, 2018. The show is loosely based on Beat the Clock. ... more on Wikipedia

Apparently, Being A Contestant On Nickelodeon's Double Dare Was Utterly Disgusting 330.3k views When you consider the best crazy kid game shows of the '90s and '80s, it's hard not to immediately think about Double Dare. ...

Double Dare is ranked on...

Double Dare is also found on...