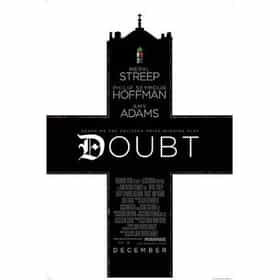 Doubt is a 2008 American drama film adaptation of John Patrick Shanley's Pulitzer Prize winning fictive stage play Doubt: A Parable. Written and directed by Shanley and produced by Scott Rudin, the film stars Meryl Streep, Philip Seymour Hoffman, Amy Adams, and Viola Davis. It premiered October 30, 2008 at the AFI Fest before being distributed by Miramax Films in limited release on December 12 and in wide release on December 25. The film's four main actors were heavily praised for their acting, and all of them were nominated for Oscars at the 81st Academy Awards. ... more on Wikipedia

Doubt is ranked on...

#533 of 804 The Greatest Chick Flicks Ever Made 423.2k VOTES Here's a list of the greatest chick flicks ever, ranked by fans and casual critics like you. The best girl movies are those ...
#166 of 551 The Best Movies of the 2000s 73k VOTES List of the best films released between the years 2000 and 2009, the era frequently referred to as the '00s or the "aug...
#15 of 301 The Best Movies of 2008 15.9k VOTES A list of the best movies of 2008, from gritty dramas movies like The Wrestler to comedies like Pineapple Express. The '00s ...
#272 of 710 The Best Movies Roger Ebert Gave Four Stars 163.8k VOTES List of movies Roger Ebert gave four stars, ranked best to eh. This is NOT a complete list of all of Roger Ebert's four star...
#60 of 151 The Most Utterly Depressing Movies Ever Made 42.4k VOTES These films are depressing, but they're also remarkable. After all, what's better than depressing movies when you need to si...
#195 of 266 The Best Ensemble Movies 17.4k VOTES The best ensemble movies feature an incredibly talented cast of actors and actresses, so much so that the cast overshadows e...
#29 of 46 30+ Great Period Films with a 1960s Aesthetic 1.1k VOTES The 1960s is one of the best settings for films because the decade marked a true change in America and around the world...
#53 of 101 The Best New York Movies 1.5k VOTES The Statue of Liberty, Times Square, crowded streets, Chinatown, multi-million dollar townhomes, Wall Street, the World Trad...
#48 of 200 The Best Mystery Movies Rated PG-13 3k VOTES List of PG-13 mystery movies, ranked from best to worst with movie trailers when available. This list takes the best PG-13 m...
#14 of 47 40+ Powerful Movies About Pedophilia 2.9k VOTES A list of the best movies about the horrifying subject of pedophelia, ranked by movie fans with film trailers when available...
#7 of 56 The Best Philip Seymour Hoffman Movies of All Time, Ranked 2.5k VOTES The best Philip Seymour Hoffman movies of all time prove that he was one of the greatest actors ever, excelling in both come...
#110 of 133 The Best Christian Movies 3.1k VOTES A list of all the best Christian movies ever made, many of which are streaming on Netflix and Amazon Prime. This Christian...

Doubt is also found on...