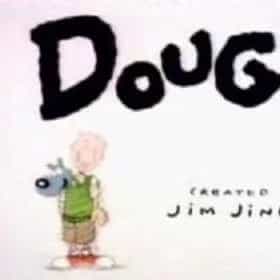 Doug is an American animated sitcom created by Jim Jinkins. The show focuses on the early adolescent life of its title character, Douglas "Doug" Funnie, who experiences common predicaments while attending school in his new hometown of Bluffington. Doug narrates each story in his journal, and the show incorporates many imagination sequences. The series addresses numerous topics, including trying to fit in, platonic and romantic relationships, self-esteem, bullying, and rumors. Numerous episodes center on Doug's attempts to impress his classmate and crush, Patti Mayonnaise. Jinkins developed Doug from drawings in his sketchbook that he created over the course of the 1980s. ... more on Wikipedia

Why 'Doug' Changed So Much From Its Early Days On Nickelodeon 813.4k views Let's reminisce about Doug. It was a popular cartoon in the '90s, created by Jim Jinkins, about an average kid going through...
The Craziest 'Doug' Fan Theories 52.5k votes '90s cartoon fan theories are all the rage these days, so it should come as no surprise that there are some crazy Doug fan t...
The Short (And Utterly Bizarre) History Of Disney's Live-Action Doug Musical 3.4k views Doug was one of the best cartoons of the '90s. At least until Disney got their hands on it, that is. When Disney ruined Doug...
The Greatest Fictional Celebrities from Nickelodeon's Doug 862 votes Making sense of the odd skin tones, bizarre inventions, and fictional celebrities on Doug was part of what made it such an e...

Doug is ranked on...

#8 of 103 The Best Nickelodeon Original Shows 183.7k VOTES Nickelodeon, also sometimes referred to as “Nick” is an American paid cable and satellite TV network which specifically cate...
#220 of 290 The Most Overrated TV Shows Of All Time 550.7k VOTES List of the most overrated TV shows of all time, ranked by fans, critics, and people like you. Ever since the dawn of the ...
#161 of 590 The Best TV Theme Songs of All Time 323.2k VOTES The best TV theme songs and TV intros of all time will take you back to some of the greatest moments in TV. Television theme...
#28 of 249 The Best Saturday Morning Cartoons for Mid-'80s — '90s Kids 2.1M VOTES These are the best Saturday morning cartoons from the '80s and '90s. Thankfully, with the advent of the DVD, the DVR, and ev...
#14 of 129 The Best Cartoons of the '90s 766.6k VOTES The best cartoons of the 90s are those the top animated series that ran between the years of 1990 and 2000 and features Nick...
#22 of 187 The Best TV Shows You Can Watch On Disney+ 13.3k VOTES Launched in the fall of 2019, Disney+ offered new shows based on Disney, Marvel, and Star Wars properties alongside old favo...
#14 of 15 Beloved TV Shows That Have Aged Horribly 22.2k VOTES Many people harbor fond memories of crowding around the TV to watch hit shows such as Friends and Home Improv...
#2 of 14 14 Amazing Shows You Forgot Were Part Of One Saturday Morning On ABC 11.3k VOTES Saturday morning cartoons are a rite of passage for most children, and anyone who’s anyone knows that Disney is the king of ...
#66 of 238 The Best Cartoons to Watch Stoned 64.7k VOTES Do you often wonder, “what are the best shows to watch high?” Or, more specifically, “what are the best cartoons to watch hi...
#10 of 54 The Best '90s Cartoon Theme Songs 31k VOTES The 1990s weren't only about grunge, Bill Clinton and the rise of the Internet, some amazingly talented animators were creat...
#167 of 1,328 The Best Guilty Pleasure TV Shows 19.7k VOTES List of the best guilty pleasure TV shows, past and present, including sitcoms, dramas, reality shows, and game shows. These...
#4 of 15 The Greatest Nick Cartoons from the '90s 47.3k VOTES Who doesn't love cartoons? Better yet, who doesn't love classic Nickelodeon cartoons from the 90s?! This list contains infor...
#57 of 686 The Greatest Shows of the 1990s, Ranked 262.9k VOTES In the 1990s, television was one of the fastest growing mediums. More TV shows were popping up than ever before, and ratings...
#119 of 195 What Shows Do You Most Want on Netflix Streaming? 195.2k VOTES What TV shows do you most want on Netflix streaming? While Netflix does offer some great streaming TV shows, and will likely...
#14 of 242 The Best 1990s ABC Shows 13.9k VOTES Go back to the days of acid wash jeans with this list of '90s ABC shows, ranked from best to worst by nostalgic TV viewers. ...
#68 of 135 The Very Best Cartoon TV Shows 40.2k VOTES The very best cartoon series shows on television, ranked from best to worst. This list of the greatest cartoon series shows ...
#18 of 101 The Best 1990s Animated Series 40.1k VOTES These are the top 1990s animated series, ranked from best to worst by user votes. The best 1990s animated series really ch...
#3 of 26 The Best Nickelodeon Shows of the '90s 86.8k VOTES These are the best 1990s Nickelodeon shows, ranked from best to worst by user votes.  Some top '90s Nickelodeon shows w...
#21 of 33 The Best Animated Shows About Families, Ranked 3.2k VOTES These families may be animated, but their mishaps and heartfelt moments are instantly relatable to viewers. The be...