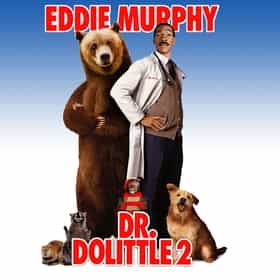 Dr. Dolittle 2 is a 2001 American comedy film, and the sequel to the 1998 film Dr. Dolittle. The film again stars Eddie Murphy in the title role of a doctor who can talk to animals, as well as Raven-Symoné as his daughter. It was written by Larry Levin, one of the co-writers of Dr. Dolittle, and directed by Steve Carr. In the film, Dr. Dolittle tries to help the animals protect their forest from unscrupulous human developers. He decides to populate the forest with a species of animal that the law protects, and enlists the help of Ava, a lone Pacific Western bear living in the condemned forest. To provide her with a mate, Dolittle turns to Archie, a wise-cracking ... more on Wikipedia