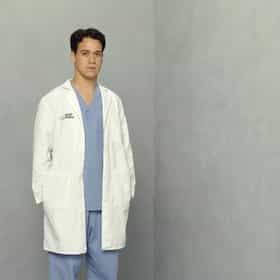 George O'Malley is a fictional character from the medical drama television series Grey's Anatomy, which airs on the American Broadcasting Company in the United States. The character was created by series producer Shonda Rhimes, and was portrayed by actor T. R. Knight from 2005 to 2009. Introduced as a surgical intern at the fictional Seattle Grace Hospital, O'Malley worked his way up to resident level, while his relationships with his colleagues Meredith Grey, Cristina Yang, Izzie Stevens and Alex Karev formed a focal point of the series. O'Malley married and divorced Callie Torres, and also entertained romantic correlations with Meredith, Izzie Stevens, and Olivia Harper. Knight ... more on Wikipedia

George O'Malley is ranked on...

#24 of 225 People who voted for George O'Malley... also upvote Chandler Muriel Bing on The Greatest TV Characters of All Time also upvote Harry Potter Franchise on The Best Teen Movies of All Time The Saddest Television Deaths Ever 1.4M VOTES Spoilers everywhere, of course! List of the saddest TV deaths as voted and ranked by fans. TV shows have long been able to p...
#30 of 124 The Greatest TV Character Losses of All Time 65.9k VOTES We all remember losing our favorite characters -- Elliot Stabler (Law & Order SVU), Mark Greene (ER), Diane Chambers (Ch...
#75 of 118 The Greatest TV Doctors 81.7k VOTES List of the best television doctors, ranked by fans of the doctor characters and their medical shows. Plenty of memorable TV...
#8 of 24 The Most Shocking TV Deaths Of All Time 40.4k VOTES WARNING: SPOILERS, SPOILERS, SPOILERS! If you are still catching up on some of your favorite current TV shows, stop scrollin...
#10 of 12 TV "Nice Guys" Who Are Horrible Human Beings In Disguise 22.1k VOTES Secretly horrible TV nice guys are the sort of character that has been around for a while. You know the type. In their ...
#7 of 88 Fictional Characters Named George 3.2k VOTES List of notable fictional characters whose name is George, including photos when available. The fictional characters named G...
13 TV Characters Killed Off Because The Writers Hated The Actor 733.5k VIEWS CAUTION: This list contains plot spoilers for various TV series.  Throughout the history of television, actors, direct...
30+ Popular TV Characters Who Were Suddenly Written Off The Show (And Why) 5.2M VIEWS Writing off a character is a big deal for any show (except Game of Thrones; characters on that show drop like flies). Some s...
Straight Characters Played By Gay Actors 1.5M VIEWS List of straight characters played by gay actors, loosely ranked by fame and popularity. One of the great things about being...

George O'Malley is also found on...