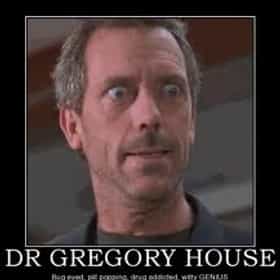 Dr. Gregory House, M.D. — typically referred to simply as House — is the title character of the American medical drama House. Portrayed by English actor Hugh Laurie, he leads a team of diagnosticians as the Head of Diagnostic Medicine at the fictional Princeton-Plainsboro Teaching Hospital in New Jersey based on Yale-New Haven Hospital. House's character has been described as a misanthrope, cynic, narcissist, and curmudgeon, the last of which was named one of the top television words of 2005 in honor of the character. He is the only character to appear in all 177 episodes and except for Wilson's brief appearance, is the only regular character to appear in the season six premiere. In ... more on Wikipedia

Dr. Gregory House is ranked on...

#805 of 787 The Most Annoying TV and Film Characters Ever 1.5M VOTES You know them. You hate them. Honestly, who knows why these characters even exist. Did someone think they were funny? M...
#56 of 70 The Best Fictional Characters You'd Leave Your Man For 79.5k VOTES We all like to fantasize and daydream about our favorite hot fictional characters. Maybe you've struck some kind of a deal w...
#11 of 1,423 People who voted for Dr. Gregory House... also upvote Buffy Summers on The Greatest Female TV Characters of All Time also upvote Willow Rosenberg on The Greatest Female TV Characters of All Time The Greatest TV Characters of All Time 1.2M VOTES List of TV's most memorable characters, of all time, chosen by the Ranker community. What makes a character live on in the p...
#16 of 87 The Best Will-They-or-Won't-They Couples in TV History 106.4k VOTES List of the best will-they-or-won’t-they couples in TV history, current or past. These ‘will they or won’t they?’ couples ha...
#75 of 487 The Funniest TV Characters of All Time 783.4k VOTES These are the funniest television characters ever created, as determined by the votes and selections of Ranker users. Lots...
#2 of 204 The Most Likeable TV Anti-Heroes 202.8k VOTES A detailed list of the most well-liked and loveable TV anti-heroes. The most likeable TV protagonists are listed in order fr...
#1 of 127 The Most Beloved Grumps in TV History 24.5k VOTES List of the best TV grumps. Male or female, these are the greatest grumpy TV characters -- television curmudgeons whose pess...
#1 of 56 Current TV Characters You Would Hire 5.4k VOTES The current TV characters you'd hire are all ranked here on this list of employable fictional people. Ever watch a televis...
#5 of 41 The Best Introvert TV Characters 3.5k VOTES Great introvert TV characters show that being introverted is different - and about so, so much more - than ju...
#6 of 14 Supposedly Good TV Doctors Whom You Would Never Want As Your Practitioner 289 VOTES There's a reason actors don't practice medicine and instead choose to play medical professionals on TV: any respectable hosp...
What Your Favorite Fictional Characters Say About You, According To Science 74k VIEWS Everyone has their own favorite fictional character. Whether they are an unassuming hero or a psychopathic antagon...