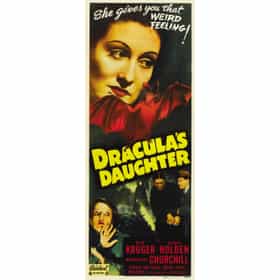 Dracula's Daughter is a 1936 American vampire horror film produced by Universal Studios, a sequel to the 1931 film Dracula. Directed by Lambert Hillyer from a screenplay by Garrett Fort, the film stars Otto Kruger, Gloria Holden in the titular role, Marguerite Churchill and, as the only cast member to return from the original, Edward Van Sloan. Dracula's Daughter tells the story of Countess Marya Zaleska, the daughter of Count Dracula and herself a vampire. Following Dracula's death, she believes that by destroying his body she will be free of his influence and can live as a human. When this fails, she turns to psychiatry and Dr. Jeffrey Garth. When his efforts fail, she kidnaps Janet, ... more on Wikipedia

Dracula's Daughter is ranked on...

#15 of 20 What Are The Best Universal Monster Films? 2.9k VOTES For well over a decade, Universal Studios released a slew of monster films that became classics almost instantly. There are ...
#83 of 94 The Greatest Vampire Movies of All Time 93.1k VOTES A list of the favorite vampire movies voted on by the Ranker Community. This is a Crowdranked list, so if you don't see...
#53 of 115 The Best Old Horror Movies 32.1k VOTES The best old horror movies include classic scary films designed to terrify. Early horror movies tapped into our deepest fear...
#25 of 45 The Best '30s Horror Movies 1.1k VOTES This list of the best 1930s horror movies features some truly terrifying tales of murder, monsters, and mayhem. Fans of the ...
#30 of 38 The Best Golden Age of Horror Movies 2.3k VOTES The Golden Age of Hollywood began at the end of the silent era in American cinema in the later part of the 1920s and lasted ...
#24 of 29 The Best Movies About Female Vampires 358 VOTES While Count Dracula may be the king of vampires, people often forget that there are female vampire movies as well. Even as f...
#20 of 29 The Best Dracula Movies 8.1k VOTES A list of the best Dracula movies. This is a list of not just vampire movies, but movies that specifically feature Count Dra...
#87 of 205 The Best Movies of 1936 2.9k VOTES List of the best movies of 1936, with movie trailers when available. These top movies of 1936 are listed by popularity, so t...

Dracula's Daughter is also found on...