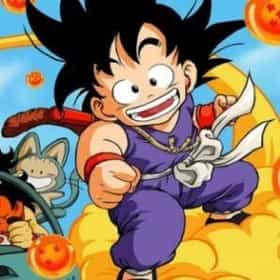 Dragon Ball is a Japanese anime television series produced by Toei Animation. It is an adaptation of the first 194 chapters of the manga of the same name created by Akira Toriyama, which were published in Weekly Shōnen Jump from 1984 to 1988. The anime is composed of 153 episodes that were broadcast on Fuji TV from February 26, 1986 to April 12, 1989. Dragon Ball follows the adventures of the protagonist Goku, a super strong naïve boy who, upon meeting Bulma, sets out to gather the seven wish-granting Dragon Balls. ... more on Wikipedia

Bulma
30 Famous Mangaka Draw Dragon Ball In Their Own Style 27.8k votes Akira Toriyama is one of the greatest manga artists in history. His wildly popular series Dragon Ball, which was first publi...
14 Reasons Why You Should Be Watching Dragon Ball Super If You Loved DBZ 2.5k votes If you read the original Dragon Ball manga, you already know exactly how it awesome it is. The series was so successful that...
35 Famous Mangaka Draw One Piece In Their Own Style 5.2k votes Eichiro Oda's One Piece is one of the most beloved manga in the medium's history. The series, which follows Monkey D. Luffy'...
The Original Dragon Ball Is Way Raunchier Than You Remember 7.7k votes If you grew up with the series, you might remember Dragon Ball as a wholesome show for kids. However, when viewed with matur...
Which Dragon Ball Character Are You, According To Your Zodiac Sign? 35k views No anime packs a punch as powerful as the Dragon Ball franchise. From the childish antics that fill kid Goku's adventures in...

Dragon Ball is ranked on...

Dragon Ball is also found on...