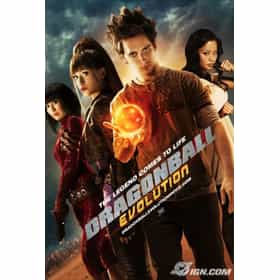 Dragonball Evolution is a 2009 adventure fiction film directed by James Wong. The film is based on the Japanese Dragon Ball manga by Akira Toriyama, and stars Justin Chatwin as Goku, Emmy Rossum as Bulma, James Marsters as Lord Piccolo, Jamie Chung as Chi-Chi, Chow Yun-fat as Master Roshi, Joon Park as Yamcha, and Eriko Tamura as Mai. The story centers on the adventures of the lead character, Goku, around his 18th birthday, as he is asked to gather seven Dragon Balls to save the world from evil alien forces. On his journey, he meets several different characters who all join the quest and help him in his task. The film began development in 2002, and was distributed by 20th Century Fox. ... more on Wikipedia

Dragonball Evolution is ranked on...

Dragonball Evolution is also found on...