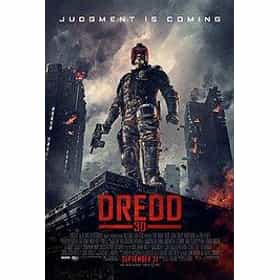 Dredd is a 2012 science fiction action film directed by Pete Travis and written and produced by Alex Garland. It is based on the 2000 AD comic strip Judge Dredd and its eponymous character created by John Wagner and Carlos Ezquerra. Karl Urban stars as Judge Dredd, a law enforcer given the power of judge, jury and finisher in a vast, dystopic metropolis called Mega-City One that lies in a post-apocalyptic wasteland. Dredd and his apprentice partner, Judge Anderson, are forced to bring order to a 200-storey high-rise block of flats and deal with its resident, Ma-Ma. ... more on Wikipedia

Dredd is ranked on...

Dredd is also found on...