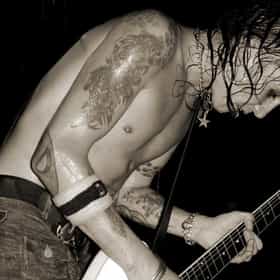 Dregen (born Andreas Tyrone Svensson; 12 June 1973 in Nässjö, Sweden) is a Swedish musician best known as the guitarist of The Hellacopters, as well as Backyard Babies. As of March 2014, Dregen has also served as the newest member of Michael Monroe's solo band, replacing Ginger as guitarist. He was formerly married to fellow Swedish singer Pernilla Andersson, who is also the mother of their first child, a son named Sixten. The couple officially announced their separation on 1 June 2015.He is a founding member of Backyard Babies, who he helped form in 1987. The band announced the start of an indefinite hiatus beginning in 2010. In a 2011 interview with Rocksverige.se, Dregen ... more on Wikipedia

Dregen is also found on...