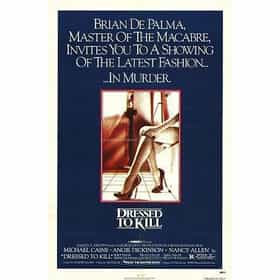 This film is a 1980 American thriller film written and directed by Brian De Palma and starring Michael Caine, Angie Dickinson, Nancy Allen and Keith Gordon. It centers on an event involving a housewife and an investigation involving a young prostitute who witnessed the event, the victims teenage son, and her psychiatrist. The original music score is composed by Pino Donaggio. De Palma originally wanted Norwegian actress Liv Ullmann to play Kate Miller, but she declined. The role then went on to Angie Dickinson. ... more on Wikipedia

Dressed to Kill is ranked on...

Dressed to Kill is also found on...

Films Edited by Gerald B. Greenberg List of All Movies Released in 1980 List of Films Scored By Pino Donaggio