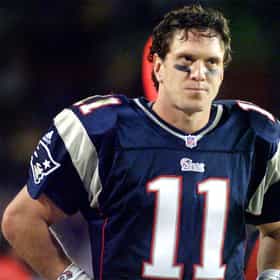 Drew McQueen Bledsoe (born February 14, 1972) is a former American football quarterback who played fourteen seasons in the National Football League (NFL), primarily with the New England Patriots. He served as New England's starting quarterback from 1993 to 2001 and was considered the face of the Patriots franchise during his nine seasons with the team.The first overall pick in the 1993 NFL Draft, Bledsoe helped improve the fortunes of the Patriots, who had fallen on hard times. Under his tenure as starting quarterback, the Patriots ended a seven-season postseason drought, qualified for the playoffs four times, and appeared in Super Bowl XXXI. He was also named to three Pro Bowls and ... more on Wikipedia

Drew Bledsoe is ranked on...

Drew Bledsoe is also found on...