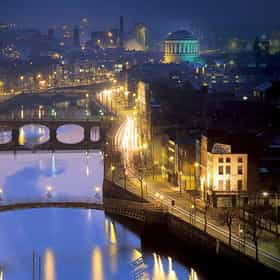 Dublin is the capital and largest city of Ireland. Dublin is in the province of Leinster on Ireland's east coast, at the mouth of the River Liffey. The city has an urban area population of 1,110,627. Founded as a Viking settlement, the Kingdom of Dublin became Ireland's principal city following the Norman invasion. The city expanded rapidly from the 17th century and was briefly the second largest city in the British Empire before the Act of Union in 1800. Following the partition of Ireland in 1922, Dublin became the capital of the Irish Free State, later renamed Ireland. Dublin is administered by a City Council. The city is listed by the Globalization and World Cities Research Network ... more on Wikipedia

Dublin is ranked on...

#14 of 374 People who voted for Dublin... also upvote Twilight Saga Franchise on The Most Overrated Movies of All Time also upvote Lord of the Rings Franchise on The Best Epic Movies The Best European Cities to Visit 60k VOTES The top cities to visit including all the best places to go in Europe. The best cities to visit in Europe are all on this li...
#11 of 72 The Best Cities for a Bachelor Party 7.1k VOTES This list is about the best cities for a bachelor party, ranked by guys who have partied there. What are the top destination...
#11 of 115 The Top Travel Destinations in the World 11.3k VOTES List of the top travel destinations in the world, including the best beaches, cities, forests, islands and small towns aroun...
#89 of 191 The World's Best Cities To Eat Well 102.3k VOTES Best Cities in the World To Eat Well: Gastronomy is the best thing in the world, and can be found all over the world. Every ...
#11 of 20 Cities You Most Want To Visit 24.7k VOTES The cities I want to visit is a list of the most beautiful cities in the world that hold an alluring appeal in a way that ma...
#18 of 59 The Best Cities to Party in for New Years Eve 22k VOTES While the most famous cities for New Years Eve parties (like New York City and Boston) get the majority of the press, there ...
#5 of 50 The Top Must-See Attractions in Ireland 1k VOTES List of things to do and see while in Ireland. What are the most popular attractions in Ireland? This list ranks the best to...
All Global Cities, Listed North to South 22.8k VIEWS This is a list of global cities, sorted by their positioning on the planet from North to South. These are the cities listed ...
#22 of 76 The Best European Cities to Visit with Kids 2.2k VOTES This is a ranked list of the best European cities to visit with kids as voted on by men and women with kids. These cities in...
#5 of 25 The Best Dog Names From Ireland 485 VOTES Ireland is a place of majestic landscapes and wonderful festivals. Whether you have seen this glorious country in person or ...
Gay Events & Pride Parades Around the World 17.5k VIEWS Here is a list of gay pride parades and gay events celebrated around the world. The LGBT Community in each city plans and pu...

Dublin is also found on...