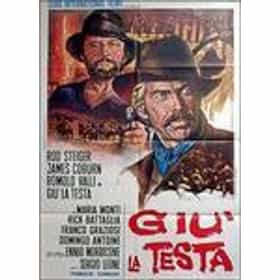 Duck, You Sucker!, also known as A Fistful of Dynamite and Once Upon a Time… the Revolution, is a 1971 Italian epic buddy Zapata Western film directed by Sergio Leone. The film stars Rod Steiger and James Coburn. It is the second part of a trilogy of epic Leone films including the previous Once Upon a Time in the West and the subsequent Once Upon a Time in America, released thirteen years later. The last western film directed by Leone, it is considered by some to be one of his most overlooked films. ... more on Wikipedia

Duck, You Sucker! is also found on...