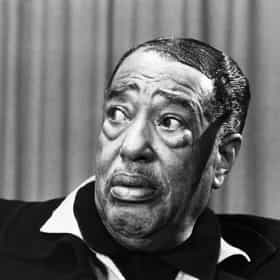 Edward Kennedy "Duke" Ellington (April 29, 1899 – May 24, 1974) was an American composer, pianist, and leader of a jazz orchestra, which he led from 1923 until his death over a career spanning more than fifty years.Born in Washington, D.C., Ellington was based in New York City from the mid-1920s onward and gained a national profile through his orchestra's appearances at the Cotton Club in Harlem. In the 1930s, his orchestra toured in Europe. Although widely considered to have been a pivotal figure in the history of jazz, Ellington embraced the phrase "beyond category" as a liberating principle and referred to his music as part of the more general category of ... more on Wikipedia

Duke Ellington is ranked on...

Duke Ellington is also found on...