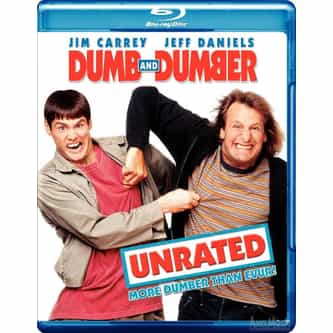 Tagline
For Harry and Lloyd every day is a no-brainer

Sequel
Dumb and Dumber To

Dumb and Dumber is a 1994 American road buddy comedy film starring Jim Carrey and Jeff Daniels. It was written by the Farrelly brothers and Bennett Yellin, and is the Farrelly Brothers directorial debut. The film tells the story of Lloyd Christmas and Harry Dunne, two good-natured but dimwitted friends from Providence, Rhode Island who set out on a cross-country trip to Aspen, Colorado to return a briefcase full of money to its owner, only to be pursued by a group who are after the ... more on Wikipedia

20.8k readers 'Dumb And Dumber' Is Far Darker And Creepier Than You Remember

Dumb and Dumber IS LISTED ON