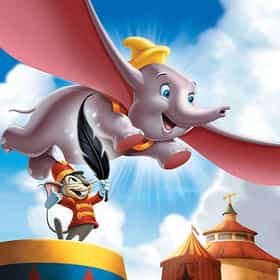 Dumbo is an American animated film produced by Walt Disney Productions and premiered on October 23, 1941, by RKO Radio Pictures. Sound was recorded conventionally using the RCA System. One voice was synthesized using the Sonovox system, but it, too, was recorded using the RCA System. Dumbo, the fourth animated feature in the Walt Disney Animated Classics series, is based upon the storyline written by Helen Aberson and illustrated by Harold Pearl for the prototype of a novelty toy. The main character is Jumbo Jr., a semi-anthropomorphic elephant who is cruelly nicknamed "Dumbo". He is ridiculed for his big ears, but in fact he is capable of flying by using his ears as wings. ... more on Wikipedia

Dumbo is ranked on...

Dumbo is also found on...