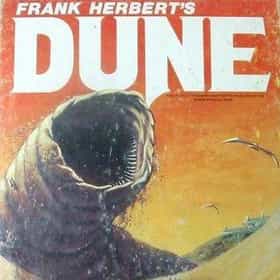 Dune is a 1965 epic science fiction novel by Frank Herbert. It won the Hugo Award in 1966, and the inaugural Nebula Award for Best Novel. Dune is the world's best-selling science fiction novel and is the start of the Dune saga. Set in the distant future amidst a feudal interstellar society in which noble houses, in control of individual planets, owe allegiance to the Padishah Emperor, Dune tells the story of young Paul Atreides, whose noble family accepts the stewardship of the desert planet Arrakis. As this planet is the only source of the "spice" melange, the most important and valuable substance in the universe, control of Arrakis is a coveted — and dangerous — ... more on Wikipedia

Dune is ranked on...

#87 of 314 The Top Must-Read Books of All Time 523.2k VOTES Need a good read? Take a look at this list of the best must-read books of all time, suitable for every one of all ages,...
#53 of 170 Books You'll Never Finish Reading 1.8M VOTES As Emily Dickinson famously said, "There is no Frigate like a Book / To take us Lands away," but sometimes you get...
#50 of 1,280 People who voted for Dune... People over 50 are 2x more likely to vote for this Men are 2x more likely to vote for this The Best Novels Ever Written 410.5k VOTES This is the ultimate list of the best novels of all time, which is based on influence, originality, popularity, and personal...
#93 of 183 The Greatest American Novels 62.9k VOTES List of some of the best American novels from classic writers, like Nathaniel Hawthorne, to more modern names, like Stephen ...
#6 of 191 People who voted for Dune... also upvote X-Men on The Best Saturday Morning Cartoons for Mid-80s - 90s Kids also upvote Fairy Tail on The Best Anime Series of All Time The Greatest Science Fiction Novels of All Time 487.9k VOTES This list ranks the best science fiction novels ever written, as voted on by sci-fi readers. Anyone can add their picks to t...
#22 of 124 The Best Fantasy Book Series 196.5k VOTES A votable list of the all-time best fantasy book series, ranked by readers of fantasy fiction. Of fantasy books, readers can...
#47 of 826 People who voted for Dune... People on the West Coast are 2x more likely to vote for this Books That Changed Your Life 162.1k VOTES The most life changing books, ranked by the wisdom of the crowd of hundreds of people. If you are looking for books that wil...
#1 of 96 The Best Sci Fi Novels for Smart People 2.8k VOTES Sometimes you want to treat your intellect as well as your imagination. That's where these sci fi novels come in. These are ...
#11 of 14 Fantastic Sci-Fi Stories You Love That Were Ruined By Their Utterly Terrible Movie Versions 7.4k VOTES Science fiction is a genre of big ideas. Unfortunately, Hollywood can't always emulate those ideas on the big screen as...
#51 of 94 The Best Books for Teens 13.6k VOTES The best books for teens include some of the greatest novels ever written, along with several contemporary books that are ex...
#1 of 66 The Best Sci-Fi Novels About Outer Space 1.6k VOTES While we await the technology to fly humanity to Mars, there's always one way to travel the vast, mysterious depths of ...
#38 of 40 Classic Books You Never Need To Read Again 3.7k VOTES Avid readers often have at least one or two books they've cracked open more than a couple of times. These stories are import...

Dune is also found on...