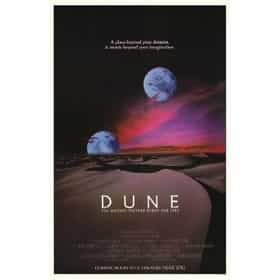 Dune is a 1984 American science fiction film written and directed by David Lynch, based on the 1965 Frank Herbert novel of the same name. The film stars Kyle MacLachlan as Paul Atreides and includes an ensemble of well-known American and European actors in supporting roles. It was filmed at the Churubusco Studios in Mexico City and included a soundtrack by the band Toto. The plot, set several millennia in the future, concerns the conflict between rival noble families as they battle for control of the planet Arrakis, which is the only planet in the universe that possesses the spice "melange", the most essential and valuable commodity in the universe. ... more on Wikipedia

The New Cast Of 'Dune' Vs. The Old Cast Of 'Dune' 3.4k votes Directed by Blade Runner 2049's Denis Villeneuve, the latest version of Frank Herbert's space saga Dune looks to be as ambit...

Dune is ranked on...

Dune is also found on...