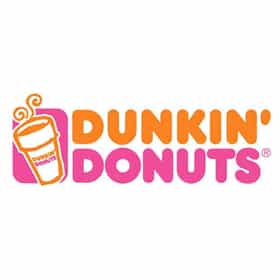 Dunkin' Donuts is an American global doughnut company and coffeehouse chain based in Canton, Massachusetts in Greater Boston. It was founded in 1950 by William Rosenberg in Quincy, Massachusetts. Since its founding, the company has grown to become one of the largest coffee and baked goods chains in the world, with 11,000 restaurants in 33 different countries. The chain has grown to include over 1,000 items on its menu, including doughnuts, bagels, other baked goods, and a wide variety of hot and iced beverages. The company primarily competes with Starbucks, as over half the company's business is in coffee sales, as well as with Krispy Kreme Doughnuts and Honey Dew Donuts. Before 1990, ... more on Wikipedia

The Best Dunkin' Donuts Coffee Beans To Brew At Home 20 votes There are tons of great Dunkin’ Donuts coffee beans to choose from, but which bags are the best? With almost 12,000 location...

Dunkin' Donuts is ranked on...

Dunkin' Donuts is also found on...