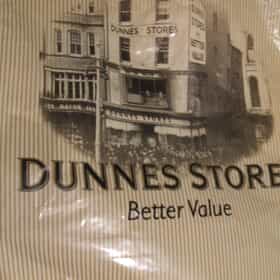 Dunnes Stores, also known as Dunnes, is a retail chain that is based in Dublin, Ireland. The chain primarily sells food, clothes and household wares. In addition to its main customer base in both parts of Ireland, the chain has operations in England, Scotland and Spain. The format of the chain's stores include a grocery supermarket operating alongside a clothing/textiles store. The grocery operation only operates in Irish stores and some Northern Irish stores, although some limited grocery ranges can be found in the Spanish stores. However some stores contain only textiles, while some contain only a supermarket. Many products are sold under the St. Bernard brand which was created in ... more on Wikipedia

Dunnes Stores is ranked on...

Dunnes Stores is also found on...