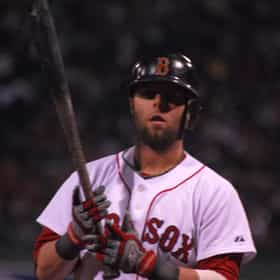 Dustin Luis Pedroia (born August 17, 1983) is an American baseball second baseman for the Boston Red Sox of Major League Baseball (MLB). He is a four-time All-Star and an American League (AL) Most Valuable Player award winner, who has also received four Gold Glove Awards and a single Silver Slugger award. Pedroia was drafted by the Red Sox in 2004, and made his major league debut in 2006. He became a full-time player in 2007, winning the AL Rookie of the Year award. He was a member of the Red Sox World Series championship teams in 2007 and 2013. He was not on the postseason roster for the Red Sox 2018 championship. Since the retirement of David Ortiz at the end of the 2016 season, ... more on Wikipedia

Dustin Pedroia is ranked on...

#292 of 710 The Best Hitters in Baseball History 266.7k VOTES The best hitters in baseball history are those who hold the all-time hitting records in Major League Baseball, change the ga...
#250 of 566 The Greatest Baseball Players of All Time 502.2k VOTES This greatest baseball players list represents the combined lists of baseball fans everywhere. Anyone can make their own lis...
#63 of 286 People who voted for Dustin Pedroia... also upvote Lord of the Rings Franchise on The Best Movies of All Time also upvote Dark Knight Franchise on The Best Movies of All Time The Top Current Baseball Players 214.3k VOTES Who do you think should make the list of the best current players in baseball? Ranked by fans, critics, and sports analysts,...
#21 of 163 The Greatest Second Basemen of All Time 51.7k VOTES The greatest 2nd basemen of all time include some of the most iconic names in MLB history. Many of the names on this list ar...
#20 of 364 The Best Boston Red Sox of All Time 68.8k VOTES The Boston Red Sox are one of the most famous and most popular teams in Major League Baseball history. The number of all-tim...
#13 of 107 The Best Current Baseball Players Under 6 Feet Tall 3.6k VOTES The shortest players in major league baseball have made almost as big an impact on the game as their taller counterparts. So...
#32 of 34 The Most Overpaid Professional Athletes Right Now 2.1k VOTES This is a list of the most overpaid professional athletes right now. There are various reasons for different players to be o...
#36 of 113 The Best Short Male Athletes 7k VOTES The best short male athletes include World Series champions, Super Bowl winners, Stanley Cup hoisters and Olympic gold medal...
#15 of 42 The Most Likely 2013 MLB All Stars 3.2k VOTES The most likely 2013 MLB All-Stars are those best players in the MLB today from the National League and the American League ...
#22 of 96 The Best Athletes of 2011 4.8k VOTES Whether they led your favorite team to a championship or helped a rival team eliminate yours from the playoffs, the best ath...
#21 of 44 The Best Current MLB Second Basemen 3.5k VOTES Whether you're working on your fantasy baseball roster or simply staying updated with the 2020 MLB rankings, ...
Famous People Named Dustin 3k VIEWS Ever thought about how many famous people named Dustin are out there? This list of celebrities named Dustin will show you ...
#1 of 20 The Best Red Sox Second Basemen of All Time 871 VOTES List of the best Boston Red Sox second basemen of all time. The Boston Red Sox have had some amazing second basemen througho...

Dustin Pedroia is also found on...