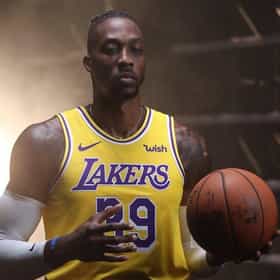 Dwight David Howard (born December 8, 1985) is an American professional basketball player for the Los Angeles Lakers of the National Basketball Association (NBA). He is an eight-time All-Star, eight-time All-NBA Team honoree, five-time All-Defensive Team member, and three-time Defensive Player of the Year. Howard, who plays center, spent his high school career at Southwest Atlanta Christian Academy. He chose to forgo college, entered the 2004 NBA draft, and was selected first overall by the Orlando Magic. Howard set numerous franchise and league records during his time with the Magic. In 2009, he led the team to the NBA Finals. In 2012, after eight seasons with Orlando, Howard was ... more on Wikipedia

Dwight Howard Loves and Hookups 11k views Who is Dwight Howard dating? Many famous women have dated Dwight Howard, and this list will give you more details about thes...

Dwight Howard is ranked on...

Dwight Howard is also found on...