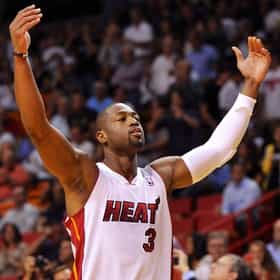 Dwyane Tyrone Wade Jr. ( dwayn; born January 17, 1982) is an American former professional basketball player. Wade spent the majority of his 16-year career playing for the Miami Heat in the National Basketball Association. After a successful college basketball career with the Marquette Golden Eagles, Wade was drafted fifth overall in the 2003 NBA draft by the Heat. In his third season, Wade led the Heat to their first NBA Championship in franchise history and was named the 2006 NBA Finals MVP. At the 2008 Summer Olympics, Wade led the United States men's basketball team, commonly known as the "Redeem Team", in scoring and helped them capture the gold medal. In the 2008–09 ... more on Wikipedia

Dwyane Wade is ranked on...

Dwyane Wade is also found on...