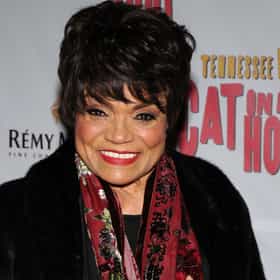 Eartha Kitt (born Eartha Mae Keith, January 17, 1927 – December 25, 2008) was an American singer, actress, dancer, comedian, activist, author, and songwriter known for her highly distinctive singing style and her 1953 recordings of "C'est si bon" and the enduring Christmas novelty smash "Santa Baby", which were both US Top 10 hits. Orson Welles once called her the "most exciting woman in the world".Kitt began her career in 1942 and appeared in the 1945 original Broadway theatre production of the musical Carib Song. In the early 1950s, she had six US Top 30 hits, including "Uska Dara" and "I Want to be Evil". Her other notable recordings ... more on Wikipedia

Eartha Kitt is ranked on...

#142 of 969 People who voted for Eartha Kitt... People on the West Coast are 2x more likely to vote for this Women are 2x more likely to vote for this The Best Female Vocalists Ever 1.8M VOTES List of the best female singers of all time, ranked by music fans and casual critics like you. Who are the greatest female v...
#54 of 224 The Greatest Black Actresses of All Time 75.9k VOTES This list ranks the very best black and African Americans actresses of all time. Throughout the history of Hollywood, movies...
#27 of 226 Make Your Voice Heard: Who Are the Best Female Jazz Singers? 65.8k VOTES The best female jazz singers in music history have a sound that's like no other. Their melodies and tones captivate us and k...
#28 of 54 The Best Actors in Live-Action Comic Book TV Shows 21k VOTES These are the actors that found that sweet spot, that portrayed these modern day gods and goddesses right. They brought our ...
#8 of 101 The Best Musical Artists From South Carolina 919 VOTES Here are the best artists and bands from South Carolina. Particularly known for its influences in the bluegrass, country, R&...
#60 of 215 The Best Easy Listening Bands/Artists 2.9k VOTES Easy listening artists list, with photos, ranked best to worst by votes. List of good easy listening bands includes a filter...
#53 of 85 The Greatest Black Female Musicians 5.3k VOTES If you're an audiophile, chances are you own albums by many of the women on this list. These are the greatest black female m...
Famous People Who Are Half-Black 1.1M VIEWS   List of Famous People Who Are Half-Black, loosely ranked by fame and popularity. Every year, more and more people a...
Biracial Celebrities List 683.3k VIEWS List of Biracial Celebrities, loosely ranked by fame and popularity. The term biracial or multiracial is applied to people w...
53 Celebrities Who Have Been Homeless 671.5k VIEWS List of famous people who were homeless, loosely ranked by fame and popularity. A surprising number of famous actors, sing...
Black Actors Who Played White Characters 69.4k VIEWS Color blind casting, or non-traditional casting, has opened up opportunities for black actors, albeit slowly. There have bee...
What Happened To Everyone In The ‘Holes’ Cast? 36.3k VIEWS Holes is one of those smart, snappy, satisfying children's movies that sticks with you long after the credits have rolled. T...
Famous People with Raspy Voices 445k VIEWS When a strong man has a raspy voice, it can make him seem more rugged and tough. A beautiful woman with a husky voice m...

Eartha Kitt is also found on...