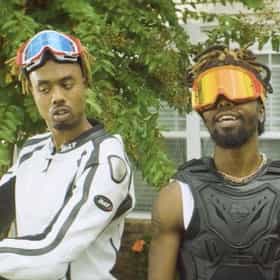 EarthGang (stylized EARTHGANG) is an American hip hop duo from Atlanta, Georgia, composed of Atlanta-based rappers, known by their stage names, Johnny Venus and Doctur Dot. They are co-founders of the musical collective Spillage Village, with J.I.D, Hollywood JB, JordxnBryant, 6LACK, and Marian Mereba. Formed in 2008, EarthGang released their first EP, The Better Party, in 2010. This was followed by several singles and two mixtapes, Mad Men and Good News in 2011. In 2013, the duo released their debut album Shallow Graves For Toys and was largely well-received, with Noisey calling it "one of the most well thought-out releases of the year" and praising the album's "playful ... more on Wikipedia

EARTHGANG is ranked on...

#103 of 125 The Best Hip Hop Groups of All Time 61.8k VOTES The overall best hip hop groups all offer an impressive roster of individual rappers, but which hip hop crew is the absolute...
#26 of 62 The Best Rap Duos Of All Time 6k VOTES Here are the greatest duos in hip hop history. Rap has a long and storied history. It was only a few decades ago when emcees...
#2 of 15 The Best Hip Hop Groups Of 2019, Ranked 3.2k VOTES Updated: check out our list of the best rap groups of 2020! No solo artists allowed - these are the best rap groups of 201...
#3 of 8 The Best Dreamville Records Artists 972 VOTES Founded in 2007 by J. Cole and Ibrahim Hamad, Dreamville Records is one of the hottest hip hop labels today. Featuring popul...