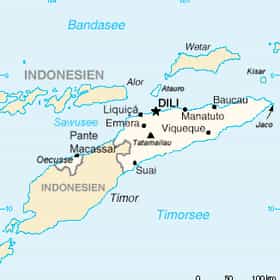 East Timor or Timor-Leste, officially the Democratic Republic of Timor-Leste, is a country in Maritime Southeast Asia. It comprises the eastern half of the island of Timor, the nearby islands of Atauro and Jaco, and Oecusse, an exclave on the northwestern side of the island, within Indonesian West Timor. The country's size is about 15,410 km. East Timor was colonised by Portugal in the 16th century, and was known as Portuguese Timor until Portugal's decolonisation of the country. In late 1975, East Timor declared its independence but later that year was invaded and occupied by Indonesia and was declared Indonesia's 27th province the following year. In 1999, following the United ... more on Wikipedia

Timor-Leste is ranked on...

Timor-Leste is also found on...