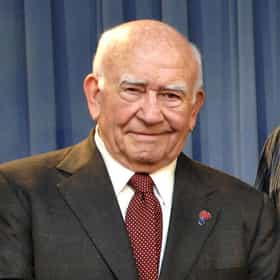 Yitzhak Edward Asner (; born November 15, 1929) is an American actor, voice actor and a former president of the Screen Actors Guild. He is primarily known for his role as Lou Grant during the 1970s and early 1980s, on both The Mary Tyler Moore Show and its spin-off series Lou Grant, making him one of the few television actors to portray the same leading character in both a comedy and a drama. He is the most honored male performer in the history of the Primetime Emmy Awards, having won seven, five for portraying Lou Grant (three as Supporting Actor in a Comedy Televison Series and two as Lead Actor in a Dramatic Televison Series). His other Emmys were for performances in two of the most ... more on Wikipedia

Ed Asner is ranked on...

#244 of 362 The Funniest People of All Time 893.2k VOTES The funniest people of all time are a mix of actors, comedians, and even a few people who probably didn't start off trying t...
#214 of 771 American Public Figures Who Are National Treasures 229.7k VOTES America's national treasures work in different fields, are of different generations, and all have different stories to ...
#11 of 40 People who voted for Ed Asner... also upvote Twilight Saga Franchise on The Most Overrated Movies of All Time also upvote Twilight Saga Franchise on The Worst Movies Of All Time The Best Living Actors Over 80 38k VOTES The best living actors in their 80s are all seasoned veterans in Hollywood who were born in 1939 or earlier. These men ...
#26 of 149 The Best Animated Voiceover Performances 143.6k VOTES This list contains information about the best animated voiceover performances in film, ranked by your votes. Several famous ...
#44 of 54 The Best Emmy Hosts Ever 9.1k VOTES Hosting the Emmy awards is a tough gig. Just showing up for the Primetime Emmys requires wit and reflexes so Emmy hosts who ...
#94 of 1,445 Celebrity Death Pool 2018 477.7k VOTES Welcome to Celebrity Death Pool 2018! In increasingly uncertain times, there remains one constant in life - we all die. Cele...
#22 of 65 Who Was America's Grandpa in 2015? 3.5k VOTES Grandfathers loom large over America. They teach us how to fish, how to ride a bike, and even how to whittle (depending on h...
#10 of 32 Celebrities Who Have Always Been Old 4k VOTES Have you ever noticed that there are some celebrities that don't age but have always been old? It doesn't matter how young t...
#36 of 165 Celebrity Death Pool 2012 26.8k VOTES In a somewhat morbid twist on celebrity deaths, this list is a celebrity death pool. You can vote for the person who you thi...
#40 of 185 Celebrity Death Pool 2014 31.5k VOTES Celebrity death pool 2014: Here's a complete list of celebrities who just might die in 2014. Every year we lose more and mor...
275+ Celebrities with Twin Children 399.6k VIEWS List of celebrities who have twin children, along with the names of the kids, their years of birth, and their other parent...
Every Person Who Has Hosted 'Saturday Night Live' 52.1k VIEWS Live from New York! It's Saturday Night! This is a list of all Saturday Night Live hosts, in reverse order,...
#32 of 172 Dreamcasting Celebrities We Want To See On The Masked Singer 7.6k VOTES The US version of The Masked Singer has taken social media by storm and no wonder. With secret, costumed celebrities and clu...
Celebrities Who Are 9/11 Conspiracy Theorists 187.5k VIEWS September 11, 2001 remains a tragic day in American history. Thousands of lives were lost, and the global repercussions...
Famous People Who Voiced Cartoon Characters 4.9M VIEWS   Everyone knows that Walt Disney, Mel Blanc, and Dan Castellaneta have provided the voices to iconic cartoon charact...
Famous Parents of Special Needs Children 11.5M VIEWS Raising a child with special needs can be both a uniquely rewarding experience and a challenge for any parent. These celebri...
29 Actors Who Have Played Santa Claus 7.6k VIEWS Who are the most famous actors who have played Santa Claus? You’d be amazed at how many incredibly well-known actors have do...
Celebrities Who Turned 90 in 2019 4.3k VIEWS UPDATED: Check out the celebrities turning 90 in 2020! Several famous people celebrated their 90th birthdays in 2019....

Ed Asner is also found on...