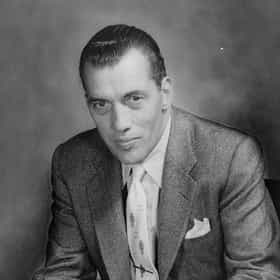 Edward Vincent Sullivan (September 28, 1901 – October 13, 1974) was an American television personality, sports and entertainment reporter, and syndicated columnist for the New York Daily News and the Chicago Tribune New York News Syndicate. He is principally remembered as the creator and host of the television variety program The Toast of the Town, later popularly—and, eventually, officially—renamed The Ed Sullivan Show. Broadcast for 23 years from 1948 to 1971, it set a record as the longest-running variety show in US broadcast history. "It was, by almost any measure, the last great TV show," said television critic David Hinckley. "It's one of our fondest, dearest pop ... more on Wikipedia

Ed Sullivan is ranked on...

The Locations of All Hollywood Walk of Fame Stars 418.7k VIEWS A list of stars on the Hollywood Walk of Fame, with photos. This list includes all television and movie stars. Acquiring a s...
Famous Irish Americans 50.3k VIEWS This list includes famous Irish Americans of both today and throughout history, hot pics included! (Famous Irish people take...
Famous People Whose Last Name Is Sullivan 4.2k VIEWS Being a fairly common name, it's no surprise there are a lot of famous people with the last name Sullivan. Do you recognize ...
Famous People Named Eddie 44.6k VIEWS List of famous people named Eddie, along with photos. How many celebrities named Edward can you think of? The famous Eddies ...
Celebrities with Twins 77.6k VIEWS A List of Celebrities with Twins, with photos! This list includes both fraternal and identical twins. Only 2% of the world's...

Ed Sullivan is also found on...