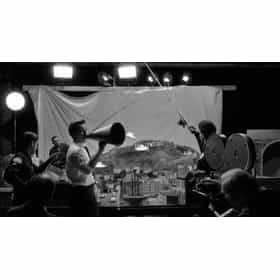 Ed Wood is a 1994 American period comedy-drama biopic directed and produced by Tim Burton, and starring Johnny Depp as cult filmmaker Ed Wood. The film concerns the period in Wood's life when he made his best-known films as well as his relationship with actor Bela Lugosi, played by Martin Landau. Sarah Jessica Parker, Patricia Arquette, Jeffrey Jones, Lisa Marie, and Bill Murray are among the supporting cast. The film was conceived by writers Scott Alexander and Larry Karaszewski when they were students at the USC School of Cinematic Arts. Irritated at being thought of solely as writers for family films with their work on Problem Child and its sequel, Alexander and Karaszewski struck a ... more on Wikipedia

10 Insane Facts About Ed Wood, The Man Who Defined Weirdness In Hollywood 23.3k views Ed Wood ranks high among the B-movie eccentrics, thanks to his relentless efforts to create a lasting camp masterpiece. He r...

Ed Wood is also found on...

Every Oscar Winning Film Ever List of All Cult Classic Movies List of All Black Comedy Movies Gay Movies: List of All Gay Films List of Films Scored By Howard Shore Movies Distributed by Touchstone Pictures List of All Movies Released in 1994