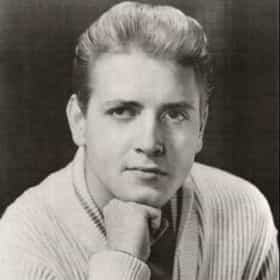 Ray Edward Cochran (; October 3, 1938 – April 17, 1960) was a mid-20th century American rock and roll musician. Cochran's songs, such as "Twenty Flight Rock", "Summertime Blues", "C'mon Everybody" and "Somethin' Else", captured teenage frustration and desire in the mid-1950s and early 1960s. He experimented with multitrack recording, distortion techniques, and overdubbing even on his earliest singles. He played the guitar, piano, bass, and drums. His image as a sharply dressed and good-looking young man with a rebellious attitude epitomized the stance of the 1950s rocker, and in death he achieved an iconic status.Cochran was involved with music ... more on Wikipedia

Eddie Cochran is ranked on...

Eddie Cochran is also found on...