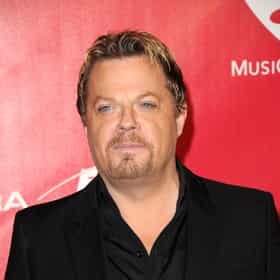 Edward John Izzard (; born 7 February 1962) is an English stand-up comedian, actor, writer, and political activist. His comedic style takes the form of rambling whimsical monologue and self-referential pantomime. He had a starring role in the television series The Riches as Wayne Malloy and has appeared in films such as Ocean's Twelve, Ocean's Thirteen, Mystery Men, Shadow of the Vampire, The Cat's Meow, Across the Universe, Valkyrie and Victoria & Abdul. He has also worked as a voice actor in The Wild, Igor, The Chronicles of Narnia: Prince Caspian, Cars 2, and The Lego Batman Movie. He has won numerous awards including a Primetime Emmy Award for Individual Performance in a ... more on Wikipedia

Eddie Izzard is ranked on...

#214 of 273 The Greatest British Actors of All Time 285.2k VOTES This list of the greatest British actors of all time has been ranked by fans of the films and TV shows in which these men ha...
#12 of 185 The Funniest British and Irish Comedians of all Time 242.3k VOTES The funniest British and Irish comedians of all time is a geographically restricted subset of the funniest people of all tim...
#82 of 408 People who voted for Eddie Izzard... also upvote Monty Python and the Holy Grail on The Absolute Most Hilarious Movies Ever Made also upvote Harry Potter Franchise on The Best Teen Movies of All Time The Funniest Stand Up Comedians Of All Time 1M VOTES A ranked list of the best stand up comedians in the history of the art form. First and foremost, all of the people on this l...
#325 of 362 People who voted for Eddie Izzard... People Age 30 to 49 are 2x more likely to vote for this The Funniest People of All Time 876.2k VOTES The funniest people of all time are a mix of actors, comedians, and even a few people who probably didn't start off trying t...
#30 of 50 50+ Actors You Forgot Were In Comic Book Movies 40.5k VOTES Over the years, some of the most celebrated actors in history have shown up on the big screen to star, to support, or even j...
#5 of 15 The Best Stand-Up Bits About Gun Control 324 VOTES When it comes to stand-up comedy, there is no topic off limits. Comedy is a great way to share viewpoints on a variety of ...
#10 of 15 All the Performers Who Have Played Queen Elizabeth II, Ranked 1.8k VOTES Queen Elizabeth II has spent over 60 years on the throne and has been fodder for pop culture ever since she was old enough t...
#36 of 53 Who Should Replace Jon Stewart as Host of The Daily Show? 6.9k VOTES UPDATE: On March 30, 2015, Comedy Central announced that Trevor Noah, The Daily Show correspondent since December 2014 will ...
Comedy Central's 100 Greatest Standups of All Time 432.9k VIEWS Comedy Central's one-hundred best stand-up comedians. These funny people have the best standup routines ever. For the full a...
24 Celebrities Who Were Raised by Single Dads 99.4k VIEWS Being a single parent can be tough, but these famous children of single dads turned out alright!  Some of these actors,...
Celebrities Who Weren't Born Where You Think 1.3M VIEWS List of the most surprising celebrity birthplaces. While famous actors and musicians are often known for growing up in cer...
Celebrities Who Are Runners 96.4k VIEWS List of celebrities who run, loosely ranked by fame and popularity. Staying in shape is very important for many famous actor...
Celebrities You Didn't Know Are Bilingual 52.9k VIEWS This list of celebrities who are bilingual is loosely ranked by fame and popularity. Several famous actors, musicians, and a...
Celebrities Who Have Run Marathons 12.7k VIEWS Marathons have become a popular way to test your strength and endurance. Several famous actors, musicians, and politicians h...
Stars React to Alan Rickman's Death 24.8k VIEWS When Alan Rickman died on January 14, 2016, fans, friends, and those who knew him took to social media to share tributes and...

Eddie Izzard is also found on...