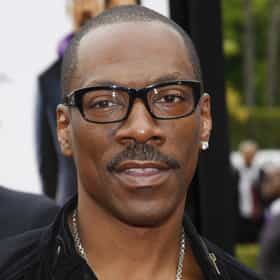 Edward Regan Murphy (born April 3, 1961) is an American actor, comedian, and singer. Murphy was a regular cast member on Saturday Night Live from 1980 to 1984. He has worked as a stand-up comedian and was ranked #10 on Comedy Central's list of the 100 Greatest Stand-ups of All Time.In films, Murphy has received Golden Globe Award nominations for his performances in 48 Hrs., the Beverly Hills Cop series, Trading Places, and The Nutty Professor. In 2007, he won the Golden Globe for Best Supporting Actor and received a nomination for the Academy Award for Best Supporting Actor for his portrayal of soul singer James "Thunder" Early in Dreamgirls.Murphy's work as a voice actor in ... more on Wikipedia

Eddie Murphy is ranked on...

Eddie Murphy is also found on...