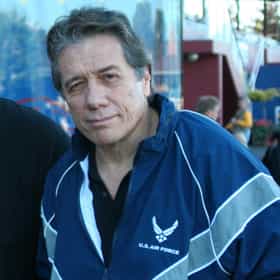 Edward James Olmos (born February 24, 1947) is an American actor, director, producer, and activist. He is best known for his roles as Lieutenant Martin "Marty" Castillo in Miami Vice (1984–1989), William Adama in the re-imagined Battlestar Galactica (2004–2009), teacher Jaime Escalante in Stand and Deliver (1988), and Detective Gaff in Blade Runner (1982), and its sequel Blade Runner 2049 (2017). In 2018, he played the father of two biker gang members in the FX series Mayans MC. For his work in Miami Vice, Olmos won the 1985 Primetime Emmy Award for Outstanding Supporting Actor in a Drama Series, as well as the Golden Globe Award for Best Supporting Actor – Series, Miniseries ... more on Wikipedia

Edward James Olmos is ranked on...

#427 of 1,151 The Best Actors in Film History 2.2M VOTES The best actors ever are ranked here in this list of the best actors in film history. These are the greatest actors ever to ...
#231 of 333 The Greatest Actors Who Have Never Won an Oscar (for Acting) 452.3k VOTES There are many actors who haven't won an Oscar. For 95 percent of the acting population, there is probably a good reason the...
#203 of 505 The Best TV Actors of All Time 107.1k VOTES The greatest TV actors of all time. Some of these actors have been in movies, some of them are even more well known at this ...
#486 of 770 American Public Figures Who Are National Treasures 224.7k VOTES America's national treasures work in different fields, are of different generations, and all have different stories to ...
#14 of 20 Who Is America's Grandfather in 2019? 519 VOTES You know those well-like male celebrities who are far more than just popular old men and more like the cool grandpa you wish...
#629 of 1,452 Celebrity Death Pool 2018 477.7k VOTES Welcome to Celebrity Death Pool 2018! In increasingly uncertain times, there remains one constant in life - we all die. Cele...
The Locations of All Hollywood Walk of Fame Stars 418k VIEWS A list of stars on the Hollywood Walk of Fame, with photos. This list includes all television and movie stars. Acquiring a s...
#57 of 210 People who voted for Edward James Olmos... are 14x more likely to vote for Salma Hayek on this list are 9x more likely to vote for Danny Trejo on this list Your Favorite Hispanic Celebrities 34.1k VOTES A List of Famous Hispanic Celebrities, with photos! These are some of the most well known Mexican Americans in the United St...
Famous People Named Eddie 43.8k VIEWS List of famous people named Eddie, along with photos. How many celebrities named Edward can you think of? The famous Eddies ...
Famous People of Mexican Descent 214.1k VIEWS Ever wonder which celebrities are Mexican? Here's an extensive list of famous people of Mexican descent loosely ranked by fa...
#2 of 37 The Very Best Latino Actors 5.6k VOTES A list of the best Hispanic actors. From the early days through the Golden Age through today, Hispanic actors have appeared ...