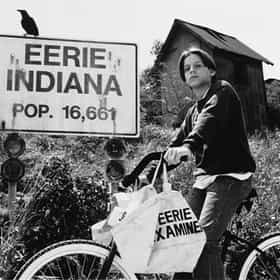 Eerie, Indiana is an American television series that originally aired on NBC from 1991 to 1993. The series was created by José Rivera and Karl Schaefer, with Joe Dante serving as creative consultant. A total of nineteen episodes were produced. The final episode aired for the first time in 1993, when the series was syndicated on The Disney Channel. The show was rerun on The Disney Channel from October 7, 1993 to late-March 1996. In 1997, the show generated a new fan base, when Fox's children's programming block Fox Kids aired the series on Saturday mornings from January to September, gaining something of a cult following despite its short run. The renewed popularity in the ... more on Wikipedia

Eerie, Indiana is ranked on...

#49 of 78 The Best Teen Sci-Fi/Fantasy TV Series 140.3k VOTES Teens can be some of the most loyal television series fans. Can be. Sometimes they're too busy on their iPhones and pirating...
#30 of 202 The Best Shows Canceled After a Single Season 120.9k VOTES What are the best single season canceled shows in television history? These shows were actually really great, but for whatev...
#37 of 70 The Creepiest Shows In TV History 50.6k VOTES Television loves to push the boundaries of what can be shown to a general audience. The medium has evolved from being a pl...
#51 of 119 The Best TV Shows That Never Got a Real Finale 64.6k VOTES List of the best TV shows that never got a real finale, ranked by how much fans miss them. The greatest cancelled television...
#13 of 28 The Best Supernatural Comedy Series 666 VOTES Many comedies on TV draw humor from relatable, everyday situations. However, there are shows that find the humor in the supe...
#178 of 273 The Greatest Supernatural Shows of All Time 456.3k VOTES The very best supernatural shows on television, ranked from best to worst. Popular supernatural TV shows have been a staple ...
#20 of 62 The Best Supernatural Horror Series Ever Made 2.7k VOTES The best supernatural horror shows pair the spooky and the scary to deliver the ultimate frights. The best supernatural horr...
#16 of 24 The Best 1990s Horror Series 3.5k VOTES Looking for a great show that will give you a bit of a scare? These are the best 1990s horror series ranked from best to wor...