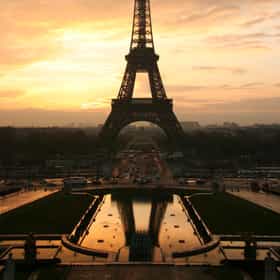 The Eiffel Tower is an iron lattice tower located on the Champ de Mars in Paris, France. It was named after the engineer Alexandre Gustave Eiffel, whose company designed and built the tower. Erected in 1889 as the entrance arch to the 1889 World's Fair, it was initially criticised by some of France's leading artists and intellectuals for its design, but has become both a global cultural icon of France and one of the most recognizable structures in the world. The tower is the tallest structure in Paris and the most-visited paid monument in the world; 6.98 million people ascended it in 2011. The tower received its 250 millionth visitor in 2010. The tower is 324 metres tall, about the ... more on Wikipedia

Disturbing Facts And Stories About The Eiffel Tower 9.6k views For 41 years, the Eiffel Tower was the world’s tallest man-made structure, standing at a proud 324 meters. Even today, it re...

Eiffel Tower is ranked on...

#44 of 67 The Best Places to Hide During the Zombie Apocalypse 211.6k VOTES Okay, so the zombie apocalypse is happening. That'll take some getting used to, but you can do it. That said, you do have to...
#5 of 18 18 Fascinating Photos of Historical Landmarks Under Construction 4.4k VOTES We see monuments, buildings, and historical landmarks as some of the most recognizable things in the world. Unlike naturally...
#15 of 30 30+ Famous Places Seen From a New Perspective 19.3k VOTES You've seen these places and landmarks before, but not like this. These fascinating photos of 30 famous places from 30 new p...
#4 of 21 The Construction of the Most Iconic Landmarks on Earth 14k VOTES Rome wasn't built in a day, and neither were some of the most famous structures on Earth. From the Berlin Wall to the Golden...
Amazing Google Satellite Images Of Famous Places Around The World 4.1k VIEWS Thanks to Google Earth, we can view amazing satellite imagery of nearly any location on the planet. These photos are not jus...
#2 of 49 The Top Must-See Attractions in France 1k VOTES List of must-see attractions in France that include the best sights throughout the entire country. Those include the best ...
#4 of 63 The Top Must-See Attractions in France 5.2k VOTES List of best things to do in France. What are the top attractions in France? From the Eiffel Tower to the French Riviera, th...

Eiffel Tower is also found on...