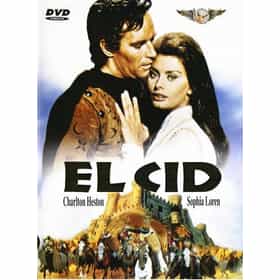 El Cid is a 1961 historical epic film, a romanticized story of the life of the Christian Castilian knight Don Rodrigo Díaz de Vivar, called "El Cid", who, in the 11th century, fought the North African Almoravides and ultimately contributed to the unification of Spain. The film stars Charlton Heston in the title role and Sophia Loren as Doña Ximena. Made by Samuel Bronston Productions in association with Dear Film Production and released in the United States by Allied Artists, the film was directed by Anthony Mann and produced by Samuel Bronston with Jaime Prades and Michal Waszynski as associate producers. The screenplay was by Philip Yordan, Ben Barzman and ... more on Wikipedia