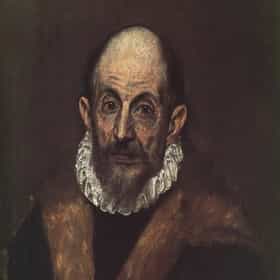 Doménikos Theotokópoulos (Greek: Δομήνικος Θεοτοκόπουλος [ðoˈminikos θeotoˈkopulos]; October 1541 – 7 April 1614), most widely known as El Greco ("The Greek"), was a Greek painter, sculptor and architect of the Spanish Renaissance. "El Greco" was a nickname, a reference to his Greek origin, and the artist normally signed his paintings with his full birth name in Greek letters, Δομήνικος Θεοτοκόπουλος, Doménikos Theotokópoulos, often adding the word Κρής Krēs, Cretan. El Greco was born in the Kingdom of Candia, which was at that time part of the Republic of Venice, and the center of Post-Byzantine art. He trained and became a master ... more on Wikipedia

El Greco is ranked on...

#2 of 35 Famous Mannerist Artists, Ranked 493 VOTES List of famous Mannerism artists, with images, bios, and information about their notable works. All the greatest artists ass...
104 Celebrities Who Have Entire Species Named After Them 62.4k VIEWS A list of organisms, including animals as well as plants, bacteria, etc., named for celebrities and other famous people (but...

El Greco is also found on...