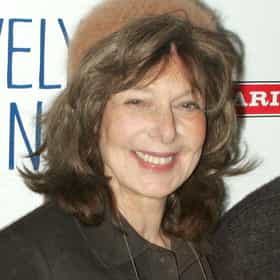 Elaine Iva May (née Berlin; born April 21, 1932) is an American comedienne, screenwriter, director and actress. She made her initial impact in the 1950s from her improvisational comedy routines with Mike Nichols, performing as Nichols and May. After her duo with Nichols ended, May subsequently developed a career as a director and screenwriter. Her screenwriting has been twice nominated for the Academy Award, for Heaven Can Wait (1978) and Primary Colors (1998) which was directed by Nichols. May is celebrated for the string of films she directed in the 1970s: her 1971 black comedy A New Leaf, in which she also starred; her 1972 dark romantic comedy The Heartbreak Kid; and her ... more on Wikipedia

Elaine May is ranked on...

#53 of 122 The Best Comedy Directors in Film History 14.4k VOTES Titans of comedy! These kings of clowning are the best comedy directors ever to make side-splitting movies. This list includ...
#54 of 101 The Greatest Hollywood Screenwriters Of All-Time, Ranked 1.3k VOTES Who are the best screenwriters of all time? That's a question you get to answer. Without great screenwriters, there wouldn't...
#56 of 106 People who voted for Elaine May... People outside of the US are 3x more likely to vote for this The Most Original Comedians 45k VOTES Picking the top original comedians may start a bar fight but it's time to weigh in. What is the criteria for choosing some o...
Famous People Whose Last Name Is May 7.5k VIEWS Being a fairly common name, it's no surprise there are a lot of famous people with the last name May. Do you recognize all t...
26 Famous Actresses Who Won Tonys for Plays 3.1k VIEWS List of Famous Actresses Who Won Tonys for Plays. Several famous Hollywood actresses have won Tony Awards for their performa...
Comedians Who Have Won Grammy Awards 6.4k VIEWS These funny people are the gold standard – literally. The legends on this list are all Grammy award-winning comedians, a few...

Elaine May is also found on...